October ’22 – Time for retailers to act on environment

SCOTTISH retailers that don’t back sustainability efforts will miss out, according to new research from the Scottish Wholesale Association and TWC.

Data firm TWC and the SWA joined forces to conduct research into Scottish consumer attitudes on sustainability and the environment. 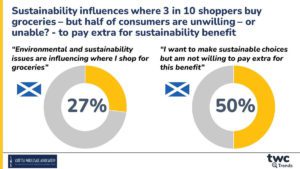 The TWC Trends research, which was conducted in June, found 63% of Scottish consumers agreed that retailers who “don’t take sustainability and environmental issues seriously” were “likely to lose out in the future. This was higher than the total UK figure of 54%.”

TWC’s analysis concluded that consumers expect to see businesses focus on their environmental impact – even if those same consumers are not similarly focused in their own actions.

Attitudes to sustainability are not uniform across age ranges either, TWC’s research revealed, with consumers over the age of 55 and those without children most likely to agree that companies should be focused on their environmental impact.

TWC suggested that this could be because these groups are the least likely to be struggling financially at the current time.

Colin Smith, chief executive of the SWA, said: “The research is very interesting as it clearly shows consumers are ever more conscious that change is required and businesses need to be more sustainable.

“However, if consumers are unwilling to pay for such investment, what does this mean for retailers and wholesalers that supply them?”

• TWC’s research was based on the views and sentiments of over 1,000 consumers across the UK, plus a boosted sample for Scotland of 400 consumers.