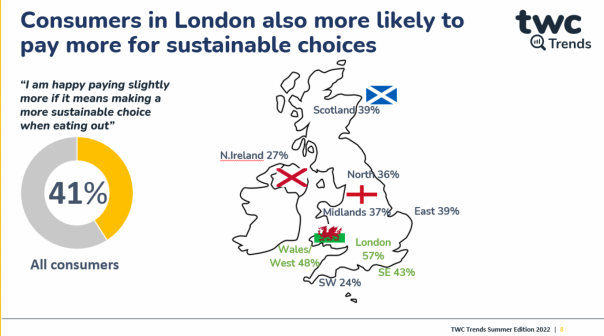 New research from TWC has revealed that 41% of consumers say they are happy to pay more if it means making a more sustainable choice when eating out.

There were also significant regional differences, with the highest agreement in London, reflecting both a younger population and a greater choice of sustainable restaurant concepts in the capital. Wales and the West was the next highest, with 48% of consumers in the region agreeing they were willing to pay slightly more for sustainable choices when eating out.

Sarah Coleman, communications director at TWC commented: “The higher willingness of younger consumers and those in London to pay slightly more for a sustainable choice when eating out is consistent with those who are more likely to make sustainable choices when shopping for groceries. There is however a similar watch out that this may be deprioritised as the cost of living crisis bites and consumers inevitably eat out less and/or seek to spend less per occasion.

“However, given the rising cost of doing business, it makes sense for operators to adopt seasonal menus, increase plant-based options and repurpose food destined for waste to increase efficiency and reduce costs, whilst simultaneously driving sustainability credentials. We have seen many restaurant concepts embracing such initiatives and creating a real point of difference.”