According to TWC Trends research, 57% of the UK population expect all companies to be focused on sustainability and their environmental impact.

The data – taken from research conducted in June 2022 – suggests that rather than being a point of difference, a focus on sustainability and the environment is increasingly an expectation.

In a similar vein, 53% of consumers believe that retailers will lose out in the future if they don’t take sustainability seriously. Currently, the multiple grocers are well ahead on demonstrating their sustainability credentials and many have significant dedicated resource to support such initiatives. For instance, Asda released its (64-page!) environmental, social & governance report recently.

Meanwhile, 56% of consumers think that convenience stores could do more to demonstrate their sustainability credentials. A third of consumers agree that shopping at c-stores is better for the environment and just 20% disagree, leaving a large proportion (45%) sitting on the fence – and perhaps looking to be persuaded. 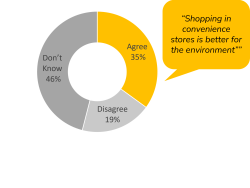 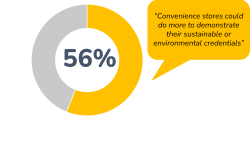 Of course, we must acknowledge the logistics of delivering to a network of small stores, but there are plenty of positive factors too – commonly visited on foot, supporting the local economy, providing jobs to local people and in some cases supporting local suppliers. There is an opportunity to talk up these benefits – as well as referencing the many initiatives being rolled out by the wholesalers that serve these stores.

The research suggest that consumers are taking less responsibility for their own actions, while they expect companies to act – only 30% agreed that environmental and sustainability issues influence where they shop for groceries (against 57% expecting companies to be focussed on environmental impact).

This also represents quite a drop from our last TWC Trends in Autumn 2021 when 42% agreed that sustainability was influencing where they shopped.